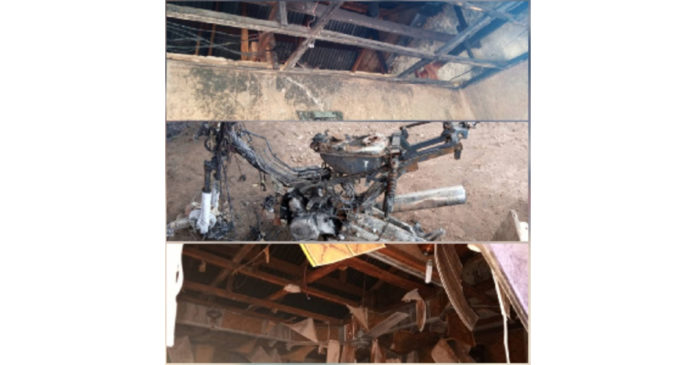 The Deputy Organiser of the National Democratic Congress (NDC) for the Bole-Bamboi constituency of the Savannah Region, Samuel Gonsob Sansah, escaped an assassination attempt in the early hours of Sunday, September 20, 2020 by unknown assassins but got items in his room including his motorbike burnt.

Narrating his ordeal to Bole based Nkilgi FM, the teacher said at about 1:00am to 2:00am on Sunday 20th September 2020, someone knocked his window and requested to see him, so as a politician and someone who is closer to his neighbours, he did not ignore the person so went out to see who he was.

He indicated that when he got to his main door, the person was not there so he decided to go towards the window where one of the people called him and threw an object, suspected to be a stone at his face.

Mr Sansah said he dodged the stone and started running for his life while shouting for help. The suspects, sensing danger, stopped chasing him and rather went back to his house and set it ablaze destroying all valuable items in his including his motorbike but spared his children.

Asked if he has a problem with someone, Mr Sansah said he has lived in Bole the past two years and has never exchanged words with anyone, adding that, aside the political debates, he is fine with all.

The Deputy NDC Organiser said, he has reported the case to the Bole Police for investigation.

The Member of Parliament (MP) for the Bole-Bamboi Constituency, Alhaji Yusif Sulemana, sympathised with the Bole NDC Deputy Organiser. The MP said, the Deputy Organiser’s wife and three children were in the room when the house was set ablaze but they also escaped to a nearby house.

The MP said the Bole-Bamboi Constituency is known to be a peaceful one in terms of politics and prayed the attack was not politically motivated because it could set an environment for reprisal attacks.

“If it is because Gonsob is an ardent supporter of the MP and has been in.the forefront of the NDC campaign, especially the Brifor Communities that he was attacked then I can call the few Brifors in NPP to stop or else the fightback will be worse…but for now, I’m not suggesting Brifors attacked the NDC Organiser,” the Bole MP told Nkilgi FM.

The MP called on the Police to do a thorough investigation into the issue.