Samuel Agyin aka ROCK, one of the 12 persons declared wanted by the police for their roles in the shooting incident at the National Democratic Congress (NDC) Regional Secretariat in Kumasi that claimed one life and left another badly injured has disclosed that all is not well with his family. 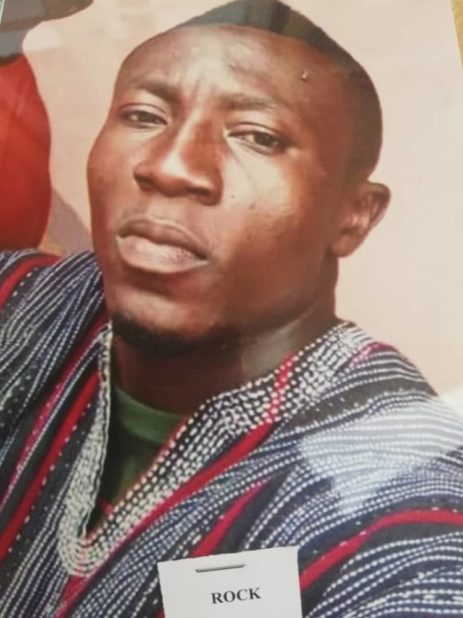 He told Kwame Adinkra on Kumasi-based Pure Fm on Thursday that his mother upon seeing images of him being declared wanted by the police in the media collapsed and is dying slowly at a health facility.
ROCK who wants his name expunged from the list of wanted suspects insists he is not in any way related to the incident and that the police know the perpetrator of the crime but still went ahead to add him among the list of suspected persons.
“My mum is dying in a hospital because the police included my name and picture on the list of wanted suspects in connection with the murder of Wassiu at the NDC Regional Office in Kumasi”, he revealed in the interview MyNewsGh.com monitored.

The professional barber is accusing the police of trying to link him to a crime he has no bearing with reiterating the police must go after the main suspect who is Warrior and who fired the gunshots.
“Warrior who committed the crime, you posted his image and added us. Why that is my mother has no idea of what happened and you went and arrested her? Right now if my mother dies who should be blamed? They must go for Warrior and interrogate the injured person because he saw the person who shot them and not some of us”, he disclosed on the show.
Continuing his account he added “everyone who was there saw that Warrior and the deceased already had their misunderstanding which escalated at the party headquarters. The injured person must be interrogated to name the gunman”, pleaded with the police.
He invoked curses on persons who caused his mother to collapse because they have declared him wanted.