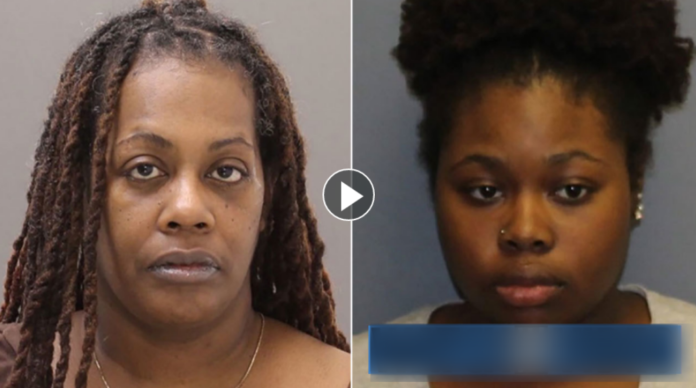 A mother and daughter have pleaded guilty to murdering five of their close relatives, including three children, because “demons told them” the victims “wanted to die.”

Shana Decree, 47, and Dominique Decree, 21, entered guilty but mentally ill pleas to five counts of first-degree murder in connection with the killings in Pennsylvania.

Shana Decree, 47, pleaded guilty on Monday to murdering five of her relatives, including her adult daughter and teenage son

Authorities said the suspects claimed that “demons” had ordered them to kill their family members and that they believed everyone inside the apartment in Morrisville “wanted to die.”

A children and youth services case worker, who went to the Decree family home in February 2019, found the bodies of Shana’s children, Naa’Irah Smith, 25, and Damon Decree Jr, 13, according to WPVI.

Campbell had been strangled while the others had been suffocated, the coroner’s office said.

Shana and Dominique were found “disoriented” inside the apartment, where police said furniture had been turned over, drywall was cracked, and glass was strewn about.

The pair later gave conflicting stories of what happened but said everyone in the house “wanted to die,” according to authorities.

Both had sought mental health treatment, and Dominique’s attorney John Fioravanti Jr told the court his client had been in treatment since she was five-years-old.

Family members claim the mother and daughter were involved in some kind of religious cult, according to the news outlet.

Shana Decree’s attorney Christa Dunleavy said her client was isolated and delusional at the time of the murders and had believed “the world was ending and there were demons in her house, and she had to obey them.”

“Her family tried to help her,” said Dunleavy, “But the delusions were too strong.”

Both Dunleavy and Fioravanti Jr said their clients had expressed horror and remorse after the killing.

“This is horrible and tragic, because I do believe the two of you have expressed remorse,” Bateman said Monday. “Unfortunately, that doesn’t bring them back. You can’t say, ‘Sorry’ and expect people to move on with their lives.”

Both women tearfully apologised to the court and other relatives in the courtroom.

“The hardest thing for me to do is decide who to say I’m sorry to first,” Shana Decree said. “To my family, I am sorry for taking away these beautiful souls in such a horrible manner.”

Dominique Decree sobbed and said her actions will eternally haunt her.

“I’m so sorry for everything that happened, and I truly don’t understand why it happened,” she said.