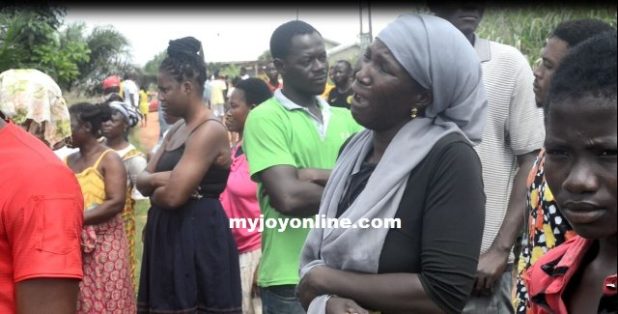 Residents of Ejisu-Jamasi woke up on Friday morning to the shocking news of the death of a 16-year-old student of Juaben Senior High School.

Family of Linda Akansaa, who suspects the second-year Home Economics student was murdered said she had gone missing for a week.

Her half-naked and almost decomposed body was discovered in a bush near an uncompleted building by a resident who had gone to clear the site of weeds.

Her death has left residents in fear as they continue to seek answers about what could have motivated the murder of the girl whose single mother has laboured to raise.

Narrating what happened, the family said she left home at about 5 p.m. on Friday, June, 14, to have her phone charged in a nearby house.

An announcement was made at a local information centre hours later when attempts to find or reach her proved futile.

The body was found at about 5 a.m., one kilometre from her family house after a foul smell from the decomposing attracted the attention of a man who was applying weedicide to the bushy site.

The man (name withheld) told Nhyira FM he suspected it would be a dead animal until he finally found the body behind packed blocks lying face down.

The student’s underwear and a pair of slippers lay a few meters away from the body.

The deceased’s aunt, Joana Laad said they least suspected that someone would murder their “sweet lively relative” in such a callous manner.

Meanwhile, Police in Ejisu have launched investigations into the matter, as the body is lined up for the autopsy.

Ms Akansaa is the second girl to die in a similar fashion in the community in the last two years.

The body of Sophia Amma Ibrahim, 16-year-old hair braider apprentice was dumped close to her house after been raped and murdered on Good Friday eve of 2017.

She had then just left her Jamasi home for work at Ejisu but did not return.