The policeman who beat up a woman at the Shiashie branch of Midland Savings and Loans Limited, Lance Corporal Frederick Amanor Godzi, has been discharged by Circuit Court in Accra where he was facing trial. 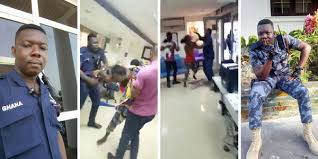 The Daily Graphic reported that the policeman and three staff of Midland who were also on trial were discharged due to lack of interest in the trial by the victim, Patience Osafo.

The accused persons had been charged with assault and abetment of assault and pleaded not guilty.
The victim, Patience Osafo, failed to avail herself to testify in the case on many occasions leading to the decision of the court in December 2018.
She also did not cooperate with police during investigations.
Lance Corporal Amanor assaulted Patience Osafo in July 2018 when she was trying to withdraw her savings of GHc 270.00 after office hours due to frustrations from the bank.
According to her statement, she had begged, saying she needed GHc105 urgently to settle her debts and also feed a baby she was taking care of.
The police officer got physical after Patience Osafo refused to leave the banking hall with her grandchild, because her money had not been given to her.
The police officer is seen holding onto the woman and hitting her multiple times with an umbrella, as she tried to wrestle away.
He also attempted to violently drag her out of the building as she held the baby in her arms.
The incident was captured on video and went viral on social media sparking public outrage and drawing condemnation from Amnesty International, the Ghana Bar Association, the Ministry for Gender, Children and Social Protection, and a number of civil society organizations.

Frederick Amanor was interdicted and his uniform and all other police accoutrements taken from him, pending internal disciplinary proceedings.
In addition, an investigation commenced into the conduct of officials of the Midland Savings and Loans limited.
The company suspended all the staff that were on duty at the time and agreed on a compensation package for Patience Osafo.
In the thick of affairs, the victim got a lot of financial support from several sources, with some other reports suggesting that she even got a house as a compensation package from the company.
–
By: citinewsroom.com | Ghana

Previous If Alcohol and Cigarettes are Legal, There’s No Reason for Marijuana to be Illegal — John Dumelo
Next I’m still single because I’m waiting for a rich man to come and marry me – Actress