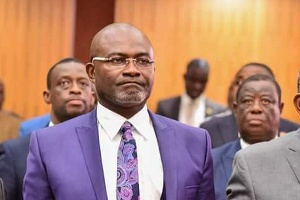 A private legal practitioner, has suggested that, the Akufo-Addo government, as well as the High Court where the New Patriotic Party’s (NPP) Member of Parliament for Assin Central, Kennedy Agyapong is facing contempt charges, are in a difficult position over what to do with him.

The case is on today, but Lawyer Yaw Twumasi Ankrah, feels the government has the backlash the Mahama administration suffered over the Montie 3 debacle to learn from, therefore, will stay away from granting a Presidential pardon, if Mr Agyapong is sent to prison, despite his popularity among NPP foot soldiers, and its ramifications to the governing party’s political fortunes two and a half months to the general elections.

However, the High Court adjudicating on the contempt case, also has the same Montie 3 case to learn from in reaching its decision.

Writing on his Facebook page yesterday, the young lawyer, listed two possible scenarios which is likely to happen later today when the case is called for the fourth time.

The first option for the Akufo-Addo government, according to Mr Ankrah, is to “either allow Ken to serve his full term in prison” while the second option is “to grant him a pardon” if he is jailed.

“However, should the court decide to impose a fine upon conviction, it takes away from the government the stress of either going for (a) or (b)”.

“But should the Court impose a fine, which it is entitled to do, it may raise questions in the minds of political actors and politicians viz a Viz the Montie 3 saga”.

He stated that “the facts of the two scenarios ( montie 3 and Ken) may not be the same, but the dent on the judiciary may well be”.

“The judge hearing the matter just like the government has a very uncomfortable decision to make”.

At the last session, the Assin Central MP, pleaded not guilty to the charge of contempt leveled against him.

This was after the Judge had opted to proceed with the the matter, despite opposition from Mr Agyapong’s lawyers.

The MP has alleged that the Judge hearing the matter, Amos Wuntah Wuni, would create a situation where he will be biased, should he go ahead to hear the case.

They had subsequently petitioned the Chief Justice on the matter and also filed an application at the High Court seeking to restrain the Judge from proceeding.

The legislator, was dragged to the court by Justice Wuni to justify why he should not be severely punished for making some comments regarding a pending case.

But his lawyers led by Kwame Gyan, on September 18, urged the court to halt proceedings explaining they had filed an application at the Supreme Court challenging Justice Awuni’s jurisdiction to hear the matter.

But Justice Wuni stated that nothing barred him from proceeding with the case, but adjourned proceedings to September 25 to hear further legal arguments from Mr Agyapong’s legal team.

This team later filed a fresh application at the High Court, asking that Justice Wuni is restrained from hearing the matter.

They explain that “since his Lordships Amos Wuntah Wuni’s authority to exercise his jurisdiction in the committal proceedings is in issue, it will be bias and prejudicial for his Lordship to be a Judge in his own case in the exercise of such questionable jurisdiction”.

They also insist it is the Attorney General that has the power by law to initiate any criminal contempt proceedings and not the court that alleged to have been threatened and scandalized.

The lawyers further reveal that they have petitioned the Chief Justice pointing him to the “unfair process emanating from his Lordship Awuni’s court”.

Justice Wuni who was informed of this development ruled that the court was proceeding with the matter.

The charge of contempt was read against the MP who pleaded not guilty.

After which the video recording was played in the court room.

Justice Wuni adjourned proceedings to today, Monday September 28, for Mr Agyapong’s lawyers to respond to the video recording and state his Defence.

The events that are likely to happen tomorrow in the land Court 12 division of the High Court, Accra may pose a very difficult situation for the government. Should the Court convict and impose a custodial sentence on Hon. Kennedy Agyapong, the government will be faced with two scenarios being;

a. To either allow Ken to serve his full term in prison, or

b. To grant him a pardon.

Should the government take option (a), it may send a signal that the government does not care for its own especially considering the standing of Ken as a politician and the influence he has on the “footsoldiers” and considering the proximity to elections. Moreso having regard to the fact that, JM granted the montie 3 ( persons whose influence as politicians arguably does not match that of Hon. Ken) pardon.

Should government opt for (b), then it puts the president and the NPP as a whole in the same bracket as the NDC and takes away the Montie 3 trampcard NPP has over NDC. It will affect the government negatively in its protection of the judiciary and the president in particular considering his record and duty as lawyer to protect the intergrity of the judiciary.

Whichever option it goes for, things may not look good at all for government. The question to be addressed by government is, DO WE SACRIFICE KEN or SAVE HIM?

I do not want to be in the position of the person with power to do either of the two options.

However, should the court decide to impose a fine upon conviction, it takes away from the government the stress of either going for (a) or (b).

But should the Court impose a fine, which it is entitled to do, it may raise questions in the minds of political actors and politicians viz a Viz the Montie 3 saga.

The facts of the two scenarios ( montie 3 and Ken) may not be the same, but the dent on the judiciary may well be.

The judge hearing the matter just like the government has a very uncomfortable decision to make.