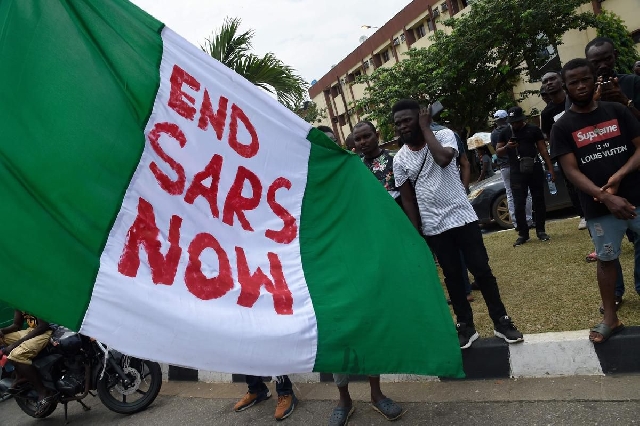 A group of Nigerian youth living in Ghana converged on the Nigerian High Commission in Accra on Wednesday, 21 October 2020 to protest and solidarise with victims of the ongoing police and military brutalities in their home country in recent times.

The angry Nigerians are demanding an apology from their leaders and called for the resignation of President Mahammadu Buhari.

The demonstrators expressed pain regarding the happenings in Nigeria.

They described President Buhari as someone who “has completely failed them”.

However, the police said they could not stage the protest because they had not informed the law enforcement body in accordance with Ghana’s Public Order Act.

Class News understands that a lot of those who gathered for the protest did not know if it was a legal gathering.

Several of them were driven to join the protest by the flyers circulating on social media.

“The flyers regarding the protest were shared all round and it got to most of the Nigerians in Ghana,” one of the protesters said.

The leaderless protesters told Class News on Wednesday, 21 October 2020 that they will ensure they get a police permit and reconvene at a later date.

An unofficial spokesperson for the group indicated that they intend to protest peacefully, adding that they will abide by all the laws of Ghana in doing so.

“However, there are rules of engagement. If you’ve noticed, we’ve been speaking with the police authorities and they are faulting us.

“They are faulting this demonstration or protest because we have not done what we ought to have done to have given us the right to be here.

“If we say we’re law-abiding, we must follow the laws and it’s not a difficult thing”, he said.

“We need a police permit before we can stand here and demonstrate rightfully, so, I want to plead with us, I know we’re pained, I don’t want to leave here,” he emphasised.

The youth in Nigeria began seeking an end to police brutality meted out to citizens ‘unlawfully’ by an anti-robbery wing of the Nigerian Police Force known as SARS.

The youth hit the streets in separate protests to press home demands for the dissolution and restructuring of the police and governance systems in general.

The protests extended to social media, through which the attention of the international media and other international figures have been drawn.

On Tuesday, 20 October 2020, in Lagos State, a 4pm curfew was imposed. However, unrelenting protesters were still found on grounds.

In Lekki, one of the urban parts of Lagos, armed men clad in military uniform stormed the place and opened fire on the unarmed protestors who hoisted Nigerian flags, amidst chants of the Nigerian national anthem.

About 78 deaths have so far been confirmed dead from yestersay’s shooting incident.