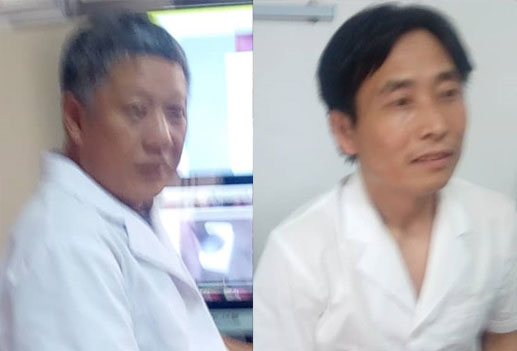 Personnel of the Medical and Dental Council, in collaboration with the Ghana Police Service, have apprehended two Chinese men for illegally running health facilities at Dzorwulu and Tema Community 11 in the Greater Accra Region without licence.

The Chinese ‘doctors’ have been identified as Liu Jin Jun, a self-styled dentist operating a dental facility called You Hao Dental Clinic at Dzorwulu and Lin Zhizhong, who also operates at Ping Kang Medical Centre at Community 11, Tema.
In addition, three Ghanaians, who served as nurses, Gilbert Baiden, Philomena Kwai Naa and Uche Bernice, were also arrested.
The three were arrested at You Hao Dental Clinic at Dzorwulu.

The two Chinese ‘doctors,’ according to the Medical and Dental Council, could not speak English and worked through interpreters.
“The medicines they issued to their patients, who were mainly Ghanaians, were in Chinese,” according to a report by the council.
Addressing the media on the arrests, the Registrar and Executive Director of the Medical and Dental Council, Dr Eli Kwasi Atikpui, said they had been monitoring the activities of the suspects since January.
He said as part of their investigations, an official of the council was sent to the You Hao Dental Clinic at Dzorwulu where he was charged GH¢200 for dental care.

He said the Achimota Police were subsequently called to arrest Liu Jin Jun and the three nurses while they were attending to a patient.
The team again moved to Ping Kang Medical Centre where a female member of the team made a request for gynecological services.
She was also attended to and issued with an assortment of drugs which they claimed were both Chinese herbal and orthodox medicines.
Dr Atikpui revealed that Lin Zhizhong, while in the process of attending to other patients, was also arrested by the team with the help of the Community 11 Police.
The two Chinese have since been granted police enquiry bail.
They would be prosecuted for running health facilities without authority. “The two health facilities have been closed down pending further investigations,” the registrar of the council added.