Residents of Esaase-Bontefufuo and its environs in the Amansie West District of the Ashanti Region have cautioned management of Asanko Mining Company to fulfill their promises and commitment to them to ensure peace prevails in the communities by fulfilling their part of the bargain made to them. 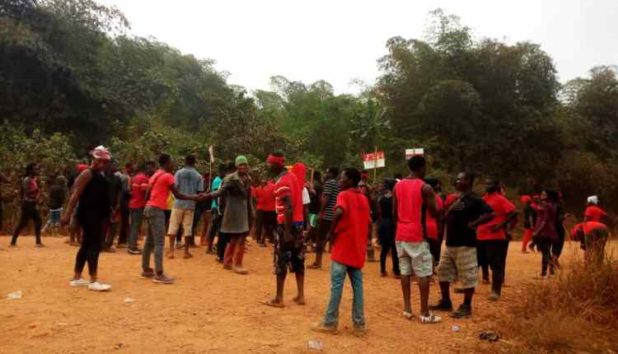 “The management told us they will resettle houses close to the mines before they will start blasting but they have done 4 blasting while the people have not been resettled.  They have destroyed acres of farm lands without compensation to the affected farmers. We won’t allow them to take us for granted. We will fight till we win the fight so they should prepare for war if they want to take us for granted” they disclosed to MyNewsGh.com during the demonstration

The residents also  complained about poor road network in the communities revealing that  the heavy duty machines of the company have rendered the roads in the unmotorable  calling on the company to either meet its promises to them or halt operations.

Management of Asanko Mining Company have declined comment on the matter when reached by MyNewsGh.com promising to respond to the litany of allegations levelled against them at the appropriate time.
Source:MyNewsGh.com/