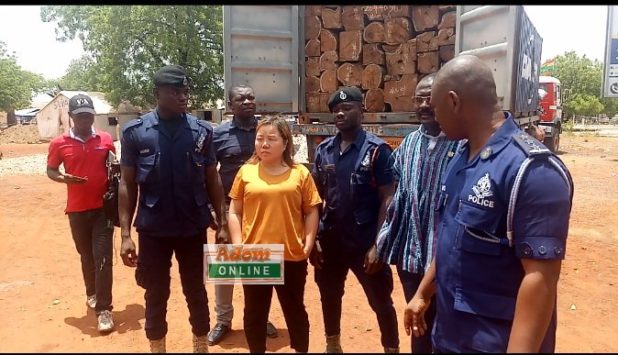 Hellen Huang during her arrest

It has emerged that the Chinese woman, Helena Huang, who was arrested for illegally logging rosewood and later went missing, is hiding in Lome, the capital of Togo.
Leader of Rosewood Taskforce, Ayamgabawa Fatau disclosed this on Adom FM’s Fabewoso segment on the morning show, Monday.
According to him, a respected high profile lawyer secured bail for the ‘rosewood queen’ and later helped her to escape to Togo because her passport had expired and she could no longer stay in the country.

“That Chinese woman is really using her nationality to use these high profile people. What hurts us so much is that it was a high profile lawyer who secured bail from the police station in Tamale and the police have refused to disclose who this lawyer was.

“After her bail in Tamale, they smuggled her to Kumasi and then to Lome Togo so that is her current location now,” he said.
He described the situation as very worrying since the Chinese woman has been seen as a very powerful woman in the North.

Ms Huang, 43, was apprehended while transporting trucks of rosewood lumbers through Tamale.
She was subsequently charged with possessing banned forestry products, but was later granted bail.
However, it later emerged that the Chinese national had breached her bail condition and could not be found.

But, Ayamgabawa Fatau told Captain Smart on Adom FM that the taskforce in Tamale had known no peace in the hands of the Chinese woman who was fully involved in illegal logging and which is done with impunity.
He also revealed that the Rosewood Reserve in Tamale has been destroyed through illegal logging, but authorities have failed to act on the issue of illegal logging.
Meanwhile, the Savannah Regional Minister, Salifu Adam Braimah has ordered the closure of Brivywell Company, the timber firm owned by the embattled Chinese woman.
The firm, which is located in Yipala, a farming community near Damongo is alleged to have been engaged in illegal logging and processing of rosewood, which has been banned, for export to China for the past three years.