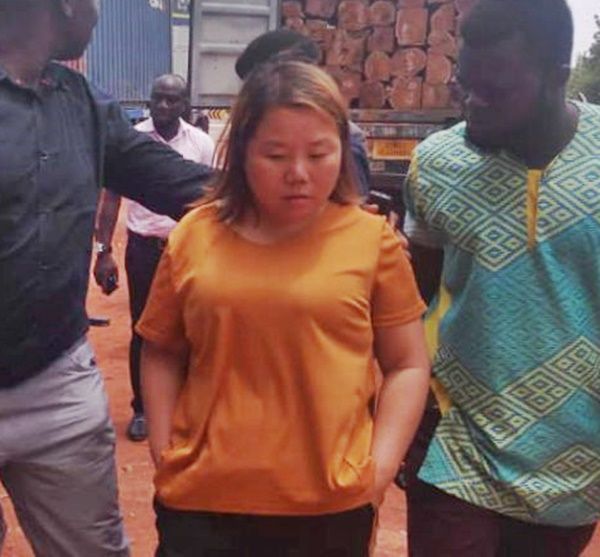 The Chinese woman who is standing trial for allegedly transporting a large quantity of Rosewood to Tema for export to China illegally has been deported.

Officials of the Ghana Immigration Service (GIS), who made this known in Accra on Tuesday, said Huang Yanfeng, aka Helena Huang, was deported for engaging in illicit business while in the country and subsequently revoked her resident permit.

A notice signed by the Comptroller-General of Immigration, Mr Kwame Esuah Takyi, informing Huang of the decision read:” You are hereby informed that your permit to remain in Ghana has been revoked. Therefore, your continuous presence in Ghana is unlawful.”

A statement confirming the deportation, which was released in Accra on Tuesday, and signed by the Head of Public Affairs at the GIS, Mr Michael Amoako-Atta, said the GIS had also informed the relevant institutions, including the Minister of the Interior, the Ministry of Foreign Affairs and Regional Integration as well as missions abroad to refuse her visa to facilitate her entry into the country in future.

Huang was arrested in Tamale in May for transporting trucks of Rosewood lumbers and charged with possessing banned forestry products.

She was, however, declared missing some 48 hours after being granted a police Inquiry bail.

The person who stood surety for madam Huang, Mohammed Bondirgbum, was thereafter arrested and granted a Ȼ3,000 bail on May 13, after he failed to produce her.

She was, however, re-arrested in June.

In late 2013, former Minister for Lands and Natural Resources Inusah Fuseini addressed a media briefing to announce government’s ban on the harvesting and export of the endangered tree species, rosewood.

“Effective 1st January 2014, the harvesting and exporting of rosewood from this country is banned until further notice,” he told the media briefing.

Rosewood harvesting
The decision was necessitated by the overharvesting of the species in the savannah belt of the country throughout the former Brong Ahafo, Northern, Upper East and Upper West Regions, as well as some parts of the Volta and Eastern Regions.

Rosewood is a hard timber species with durable, distinct looking grain which takes more than one hundred years to mature. They are wild species which are not cultivated; they grow by themselves.

Environmental activist Fatawu Ayamga
“The most expensive bed in the world is made up of rosewood species. So you can see how valuable the species is,” he added.

A lot of the rosewood trees are harvested and exported to China and to Europe. Before the ban was announced, it was estimated within a spate of three years, more than half of all the available species in the Savannah belt had been harvested and exported. Subsequent Lands and Natural Resources Ministers Nii Osah Mills and John Peter Amewu renewed the ban in late 2014, and 2017respectively.

Current Lands and Natural Resources Minister Kwaku Asumah Kyeremeh says the ban is still in force. “Rosewood, indeed, there is a ban on the harvesting of this particular species. Because of the ban, nobody can go to the forest or the grounds to harvest rosewood,” he said in response to a Joy news question at a media briefing.