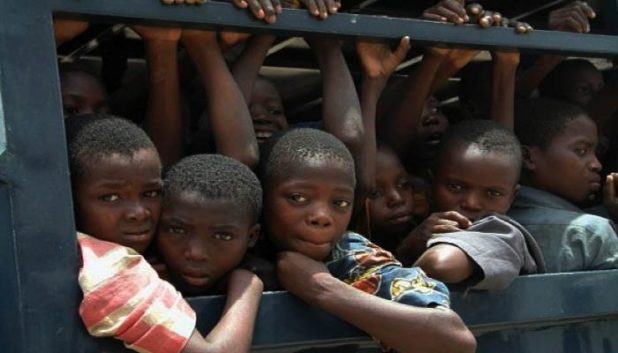 The Assin Fosu Police Command in the Central Region has rescued 29 Togolese children from persons suspected to be engaged in human Trafficking.

The victims were being transported in a Sprinter bus with registration number GY-2576-13 from Togo to Elubo when the driver identified as Yusuf was apprehended by the Assin police after they realized that the vehicle was overloaded.

Upon police interrogation, the driver who claimed to be a Ghanaian said they left Togo on Tuesday around 1:30pm with the children aged between 1-20 years old.

He explained that he was transporting the children who are on vacation at Togo to their parents in Elubo to help them with farming.

Speaking to MyNewsGh.com, a reporter with a local station Oheneba Ambrose said ‘the driver explained that every vacation, he transports children from Togo to Elubo to assist their parents with farming. The children had student ID cards on them when the social welfare officials searched them’.

The children and the driver were on Wednesday sent to the human trafficking department of the regional police office in Cape Coast and were given a place to sleep.

The victims are yet to reunite with the families.

The driver has since been kept in police custody to assist with investigations.