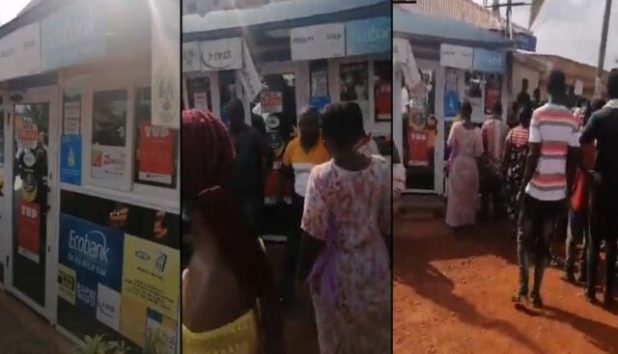 Two people have been arrested in connection with a daylight robbery of mobile money (MoMo) shops at Bantama and Buokrom Estate Junction in Kumasi.

Residents were shocked when gun-wielding robbers on motorbikes brazenly struck at the two shops in the full glare of the public during rush hours in April and June respectively.

The Ashanti Regional Police Command said two suspects who are members of a syndicate operating in Accra and Kumasi have been arrested after being captured in CCTV footages.

“The Bantama robbery incident and that of Buokrom are very similar.  It is this very syndicate who perpetrated that crime,” Police Public Relations Officer, ASP Godwin Ahianyo has said.

Three robbers, armed with foreign pistols, stunned residents of Bantama when they robbed workers in a mobile money shop after taking them hostage at about 7 pm on April 21, 2021.

The robbers were seen ordering shop attendants at gunpoint to pack cedi notes into plastic bags in an operation that lasted about two minutes.

A few weeks later, on June 1, 2021, another robbery incident in a similar fashion was recorded at Buokrom Estate Junction.

A staff of that financial institution identified as Collins Dapaah sustained gunshot wounds and has been undergoing treatment.

“Arrest has been made. Some persons have been arrested. In both cases, we had video footages via CCTV cameras. We’ve been able to identify some persons.”

“We are in touch with the Greater Accra region [police]. The suspects are with the Accra Regional Command who are investigating them in other related cases.

“The very last one that you are talking about too was also perpetuated by the same people because, in the CCTV footage, we’ve identified one person who was involved in two earlier cases,” he added.

The development, coupled with some violent incidents recorded in other parts of the region, threatens the security of the people but the police say the residents do not need to panic.

ASP Ahianyo announced measures to ensure the safety of residents as it focuses more on preventive policing.