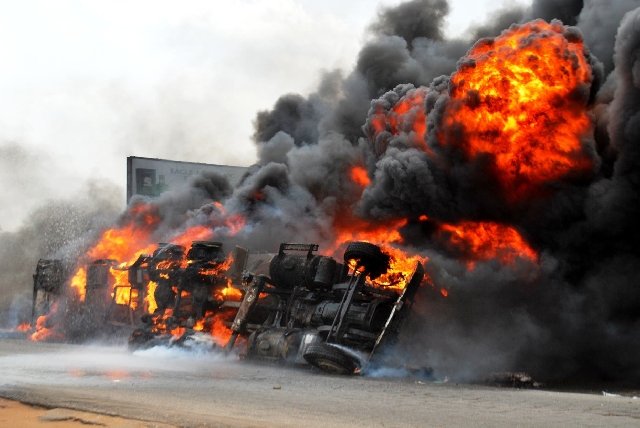 File photo of tanker explosion
Some 10 people at Abrofo Mpoano bear the Cape Coast Castle in the Central Region have been injured in an explosion at a premix fuel station.

The fire explosion, which occurred a few minutes after a tanker discharged fuel at the station, destroyed nearby structures and shops as well as outboard motors, canoes and fishing nets.

Firefighters spent about two hours battling the explosion to bring it under control.

Investigations have been launched into the disaster to trace the cause.

This is the second explosion within one week.

A gas station, Mighty Gas, near the Trafalgar Hospital at Ho in the Volta Region, exploded on Wednesday, 11 November 2020, leaving 14 people injured.

The residents said they called the Ghana National Fire Service following the explosion.

Firefighters quickly rushed to the scene to quench the blaze.

About five drivers who were purchasing gas at the time of the explosion got injured and were rushed to the hospital.

The gas station has been closed down temporarily.