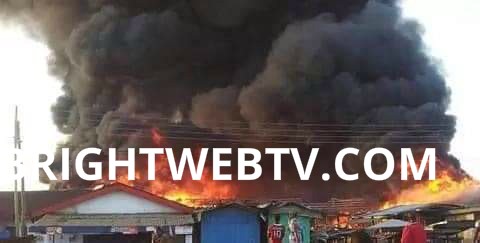 Fire gutted Assin Foso Market in the Assin Central of the central regoin destroying goods worth several million of cedis on early monday.

An eyewitness said,a distress call was made to the Ghana National Fire Service, which responded immediately but spent close to two hours before the situation was brought under control and that had it not been for their quick intervention, the fire would have caused more havoc.

According to him, two children threw fireworks in front of one of the affected stores and the fire started.
He further claimed one of the stores has fireworks in it and therefore, continuous explosion from the said store, started spreading the fire into different parts of the market.

Investigation is ongoing to know the possible cause of the fire.

Previous (VIDEO) Slap any appointee who asks for certificate before employment if we win in 2020 – NDC’s Akamba
Next Prophet Owusu Bempah, 9 other men of God to die in 2020 – [Audio]

By:brightwebtv.com/Nana Asare Barimah   The cause is unknown Parts of the Sakumono School Complex in …