Police in the Central Region have warned against false kidnapping alerts after some residents of Abura assaulted a man at St. Lawrence Catholic School over wrong suspicions he was in the school to kidnap a girl. 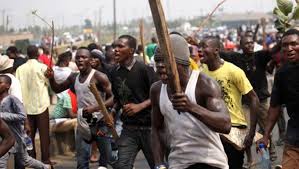 The victim, one Enoch Mensah Nortey was in the school to visit his daughter, police have clarified.
In an interview with Citi News, DSP Irene Oppong, the Central Regional Police PRO said: “the allegations are false since Christabel Nortey is a daughter of the alleged kidnapper.”
DSP Irene Oppong noted that upon further investigations it was revealed that the alleged kidnapper, upon reaching the school, even went to the headmaster’s office to identify himself as the father of the girl.
“She was in the school to visit her daughter like any other ordinary parent would do when his or her child is at school,” DSP Irene Oppong noted.
According to the Police Public Relations Officer, the Regional Police Command received a distress call that some irate youth of the town had besieged the premises of St. Lawrence Catholic School.
She narrated that the Police quickly rushed to the school to intervene in the attack “to save the situation and prevented the occurrence of mob justice.”

The Police PRO warned residents of Cape Coast and its environs to desist from raising false kidnapping alarm adding that the law would deal with persons who incite mob action.
“The Regional Police Command is by this issuing a warning to persons who are in the habit of raising false alarms that tend to incite one against another.”
This comes on the back of the prosecution of some Senior High School Students in the Western Region who claimed they had been kidnapped but turned out to be untrue as welll as the kidnapping of some three girls in the same region.
Eighteen-year-old Anthony Osei Prempeh, a student of Ghana Secondary Technical School (GSTS) who faked the kidnap of his colleague student, De-Vreeze Quainoo, in demand for a ransom has been convicted.
He was convicted on his own admission of guilt and sentenced to a one-year bond of good behavior.
–
By: | citinewsroom.com | Ghana

Previous TODAY FRIDAY,22 FEBRUARY 2019 NEWSPAPER HEADLINES
Next My mum collapsed when she heard I have been declared wanted – NDC shooting suspect