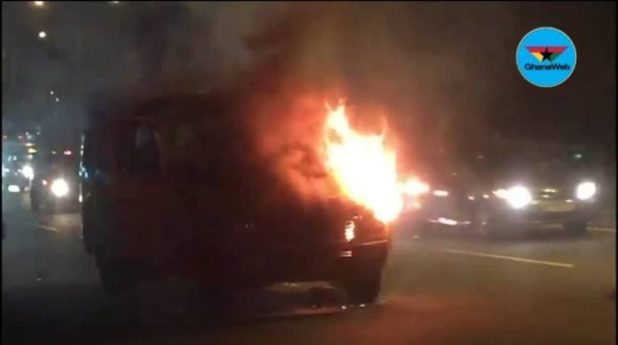 A Sprinter bus which had passengers on board Monday evening suddenly caught fire causing anxiety among travelers and passersby. (Video below)
Click Here for FREE BREAKING News on WhatsApp
The car which was heading to Abelekuma from Dzorwulu ended up in flames when it got to the Achimota overhead.

An eyewitness said the passengers upon realizing the danger quickly alighted to avoid being hurt.

The driver and his mate in their quest to douse the fire went round in search of water as there was no fire extinguisher in the car.
As at the time of filing this report, no casualties had been recorded.

This news comes barely three days after an accident on the Techiman-Kintampo road which claimed over 60 lives.
On Friday, March 22, two buses collided with one of them catching fire. Several of the passengers in the bus were burnt beyond recognition with others in the other bus dying on the spot.
Many others with varying degrees of injury were rushed to nearby hospitals for medical attention.
A second accident also occurred the same day at Ekumfi Dunkwa on the Cape Coast-Accra road. About 10 people also perished in that accident.