Breaking News
Home / CRIME AND PUNISHMENT / Armed police, soldiers to be deployed on streets of Kumasi and other areas – Minister reveals 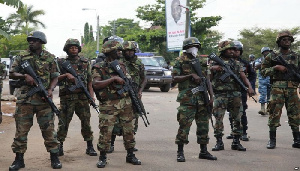 According to the minister, the move by the Regional Security Council is one of the measures taken in the region to ensure peace before and after the 2020 general elections which is little over a month away.

“Starting from tomorrow, we are going to deploy both the police and the military into our communities. You will see them in their numbers in our communities”. Simon Osei Mensah revealed in an interview with Kumasi based Pure FM monitored by MyNewsGH.com

“The region in collaboration with the ministry of energy is going to light crime-prone areas of the region”, he added

The Regional Minister’s revelation comes in response to the current insecurity situation in the country with some recorded murder cases in the Ashanti Region in particular.

At least, 15 persons have been killed in the region this year according to official police sources

However, on the issue of elections, the minister insisted that his men are going to match anyone who has planned to bring violence during the process boot-for-boot.

“But what I will say is, we are not going to allow anyone who has planned to fool around the up-coming election to bring insecurity. There is no way we are going to give them a chance. The police and the military will deal with such people amicably”. Mr Simon Osei-Mensah said.