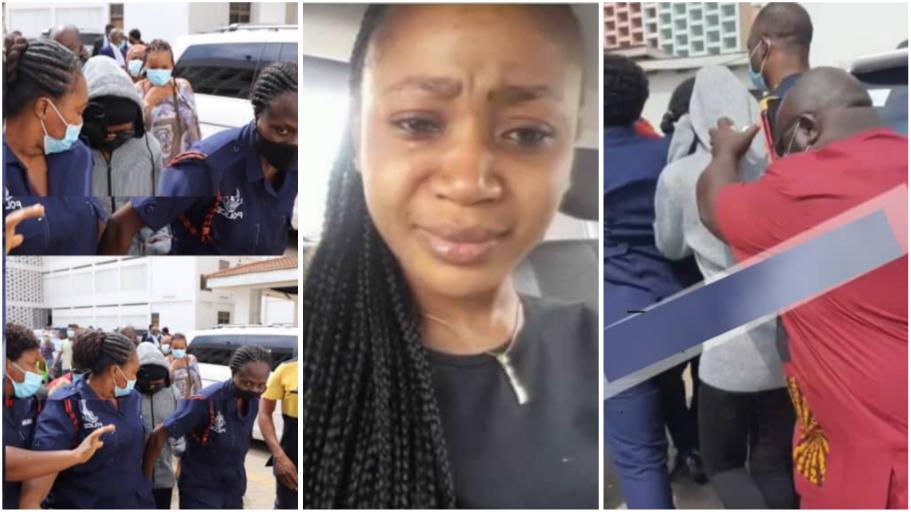 The Criminal Court 1 Division of the High Court has thrown out an appeal filed by lawyers of actress and socialite Rosemond Brown, popularly known as Akuapem Poloo.

Akuapem Poloo was handed a 90-day jail term by an Accra Circuit Court for publishing obscene material and violating the dignity and integrity of her seven-year-old son in a nude photo she posted on social media in June, 2020.

Though she served a period into her term, her lawyers appealed the judgement considering it too harsh.

She was subsequently granted an GH¢80,000 bail, pending the determination of the appeal.

On Wednesday, December 1, the Court found her appeal without merit and was subsequently ordered to go and continue her 90-day imprisonment.

On April 16, Actress and social media personality Rosemond Brown is popularly known as Akuapem Poloo was jailed for 90 days or three months by an Accra Circuit Court.

This was after Akuapem Poloo pleaded guilty to three charges.

She was charged with the publication of nude pictures with her seven-year-old son. She changed her not guilty plea to guilty before being convicted.

She was sentenced to 90 days on each count but the court said, the sentence must run concurrently.
This means she will only serve a 90-day jail term which is three months.

The Court presided over by Her Honour Mrs. Christiana Cann, said such cases are becoming prevalent in society, and Institutions including the court must act.

The court said it took into consideration all the plea for mitigation before arriving at the decision.

Before her sentencing, the presiding judge confirmed that the actress was not pregnant after her test came out negative.

The pregnancy test ordered by the court is a requirement by law to ensure that, before a woman who pleaded guilty in court is sentenced, the court should know her status.

She was then remanded into custody for the prosecution to take her to any Government hospital to conduct the pregnancy test and produce the results.

The outspoken actress was charged with three counts of publication of obscene materials, engaging in domestic violence, conduct that in any way undermines another person’s privacy or integrity, and engaging in domestic violence namely conduct that in any way detracts or is likely to detract from another person’s dignity and worth as a human being.

Rosemond who had displayed her naked picture with her son on social media on June 30, 2020, earlier pleaded not guilty to all the charges.

Brief facts of the case presented to the court by the prosecution led by Chief Inspector Agartha Asantewaa were that the complainant is Bright K. Appiah, the Director of Child Rights International Ghana.

According to the prosecution, on June 30, 2020, the accused person celebrated her son’s seventh birthday and she took her nude pictures together with her son who was also half-naked and posted same on her Instagram page which went viral on social media.

She told the court that, the pictures attracted comments, adding that the behaviour of the accused person was likely to detract from the dignity of her seven-year-old son among others.

Chief Inspt. Agartha told the court that the complainant petitioned the Director-General Criminal Investigations Directorate and the matter was referred to the Domestic Violence and Victims Support Unit.

Akuapem Poloo, she said was arrested and in her caution statement, admitted posting the nude picture with her son unintentionally.

But, the prosecution held that Rosemond had deliberately posted the nude picture together with her son