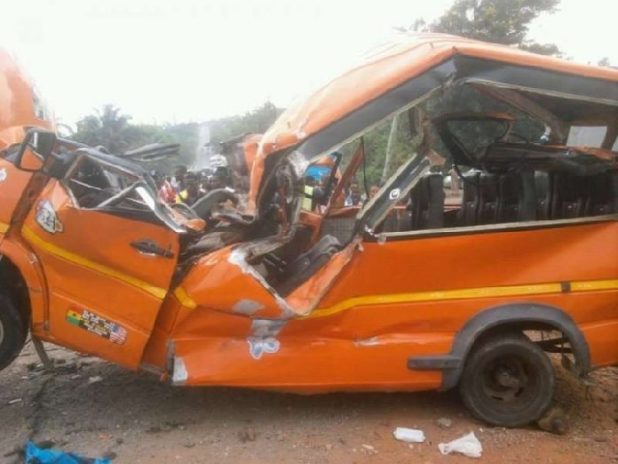 A school bus carrying about 12 schoolchildren was on Wednesday, 24 February 2021, involved in an accident at Akim Oda in the Eastern Region.

The incident occurred around 3 pm while the school bus was on its way to drop off pupils at their various homes after school.

The driver of the bus had dropped off some of the pupils around the Seventh Day Adventist (SDA) area and was on the way to Akim Aboabo.

However, on reaching the crossroads to join the stretch to Aboabo, a Kia truck, which was travelling from Accra to Akim Oda, crashed into the driver’s side of the school bus.

Narrating the incident, one of the victims, a pupil of Benaga Star Academy, Michael Antwi, said: “We went to drop off some kids there, so on our way, the Kia was speeding and it was going toward Oda and though it tried applying its brakes, the brakes failed and it crashed into our car. I got injured.”

Three of the pupils are reported to be in critical condition at the Akim Oda Government Hospital.