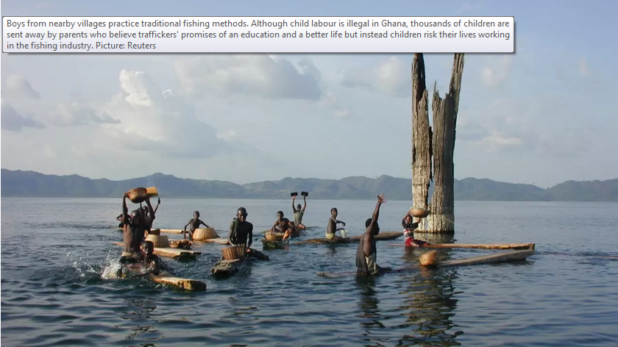 The Anti-Human Trafficking Unit of the Eastern Regional Police Command and the Ghana Navy have rescued some 16 children involved in child labour at Afram Plains.
Nine adults have also been arrested in the process as they posed as foster parents in child trafficking cases in the area.
According to the Eastern Regional Police Public Relations Officer, DSP Ebenezer Tetteh, a total of 24 children were found to be engaged in hazardous jobs but just 16 of them were rescued in the operation which took place on Saturday.
The other children were reportedly hidden by the foster parents when they got a hint of the anti-trafficking operation.

“As we speak now, 16 of the 24 have been rescued and as a result of that, nine foster parents who were keeping some of those trafficked children and using them for adult jobs have also been arrested. We are currently investigating the matter and we are also trying our best to rescue the other 8 to boost our investigations,” DSP Ebenezer Tetteh said.

He added that those arrested will soon be arraigned while the rescued children will be reunited with their families when the police complete their investigations.

“We will possibly arraign the persons who facilitated in transporting those children to be engaged in those adult jobs.  We are holding the 9 and the 16 will be reunited with their families after we conclude our investigations,” he added.

The operation is linked to chaos that was witnessed on the island over the weekend.
The Member of Parliament for Afram Plains North Constituency, Betty Krosbi Mensah, in a statement over the weekend said the joint police and navy operation team created fear and panic in that constituency, leaving some people missing after they took to the bush at the sound of many gunshots.
While raising questions about the mode in which the operation was conducted, she called for an immediate release of the nine arrested persons.

“The action by the uniformed security men created fear and panic causing women and children to run into the bush for cover. The whereabouts of seven of the children who escaped into the bush cannot be traced 24 hours after that unfortunate incident….The nine residents (men) arrested should be released with immediate effect. I also demand immediate answers as to who ordered the unprofessional arrest of the nine residents and for what reasons/ offence,” she said.