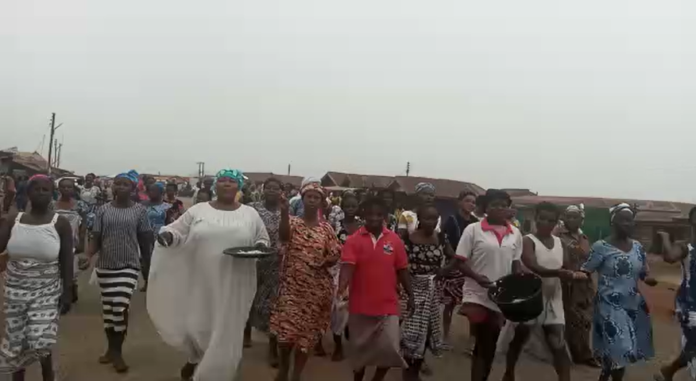 Traditional leaders at Adrobaa, a farming community in the Tano North Municipal of the Ahafo Region have performed rituals to pacify the land after an accident which claimed the lives of five pupils.

The Nananom, led by Adrobaahene, Nana Odiasempa Boadu and Nana Adwoa Dum II, the Queenmother in the area, made an offering to the deity to avert any similar calamity from befalling them in the future.

They marched around the community reciting incantations amid pouring of libations.

Adrobaahene Kyeame, Nana Kwame Nkrumah, who spoke to Kojo Mframa, explained the reason is to seek peaceful rest for the souls of the departed pupils.

According to him, the people of Adrobaa uphold traditional values, adding it has even become necessary as the incident is the first to be witnessed in the community.

Five pupils and a driver lost their lives in a ghastly accident on the Techire-Adrobaa stretch when the school bus transporting about 25 pupils somersaulted.

Three pupils between the ages of four and 12 died on the spot, and two more died in the subsequent days.

Previous Road tolls: We will no longer be paying 50 pesewas and ₵1 – Roads Minister
Next We’ll not reduce transport fares despite fall in fuel prices – GPRTU