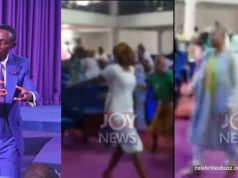 There was drama at the Zoe Outreach Embassy when some people stormed the church, briefly disrupted church service to demand what they say is their locked up investments, Sunday.

The aggrieved persons mostly men – some of them members of the Outreach – say they were convinced by the founder and leader of the East Legon-based church to invest hundreds of cedis with EL Real Estates and Tikowre Capital.

They say all attempts since last year to withdraw their dividends, principal from the two entities allegedly owned by Kelvin Kwesi Kobiri have proven futile.

According to them, it has become a nightmare even getting to speak to the overseer of the church.

“We want our money because you call him [Mr Kobiri] and he does not pick your calls and when he does he will only insult you.

“He has become very arrogant after taking our money,” one of the disgruntled customers who said he has ¢1 million investment told Joy News’ Maxwell Agbagba.

“We know he is a man of God and so we trusted him. Some of us have been with the church for a very long time and being a senior pastor we trusted him more that is why we saved out money with him,” another unhappy customer said.

Yet again, another man who said he invested ¢500,000 with EL Real Estates upon the recommendation of Mr Kobiri said he wants his money back.

The men told the reporter that during one of Zoe Outreach Embassy’s service, the founder and leader introduced them to the service and they trusted him so they invested their monies in the entities.

But since November last year, all attempts to access their funds have been fruitless.

At the time of filing this report, the aggrieved customers were lingering on the church premises after the day’s service had finished insisting to see Mr Kobiri.

According to eyewitnesses, the disgruntled customers initially entered the church when worship was ongoing which caused a scuffle and threatened to disrupt the service.

One of the aggrieved customers was reportedly slapped during the scuffle. Security has been beefed up to forestall any further skirmishes.

Joy News’ attempt to get a response from the leadership of the church has proven futile so far.