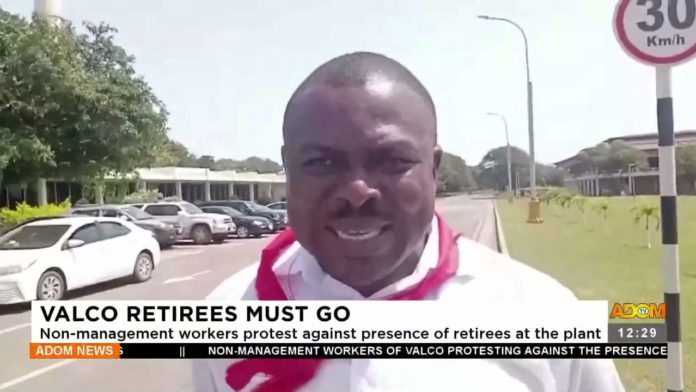 Workers of Tema-based Volta Aluminum Company (VALCO) are protesting the continuous stay in office of some top management personnel who they described as retirees.

According to the workers, the retirees at the company number about 28 – nine being in administration.

The workers are also protesting their poor conditions of service, amongst others.

According to the workers, while they operate locally, all of their businesses are done outside of the country and all monetary transactions are done in dollars.

However, the workers say they are struggling due to the presence of the retirees in most managerial positions who do not have the workers’ well-being at heart.

Speaking to JoyNews, the Local Union Chairman, Edgar Tetteh, said the protest will go on until all those who have attained the mandatory retirement age retire.

He said the presence of the retirees is overstretching the finances of the company.

The workers are, therefore, calling on the government and all relevant authorities to come on board to ensure that all the retirees in the company leave office.