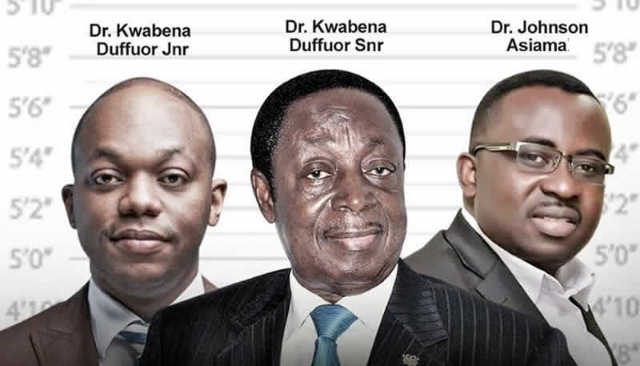 The Duffuors and a former deputy BoG governor
Former Bank of Ghana Governor Dr Kwabena Duffuor has pleaded not guilty to some 71 new charges filed against him and eight others by the state.The state amended its sheet on Thursday, 18 June 2020 compelling the Attorney General to drop the previous set of 68 charges and replace them with 71 others.

Apart from Dr Duffuor, the others also pleaded not guilty.

They were admitted to the same bail conditions as earlier granted by the court.

The court, presided over by Justice Bright Mensah, adjourned the matter to July 16 and 17, for Case Management Conference.

This was after the defence lawyers had prayed the court to give them ample time to peruse the voluminous documents filed by the state.

Last week, the Commercial Division of the Accra High Court presided over by Justice Jennifer Dadzie dismissed an injunction application filed by the Receiver appointed to liquidate uniBank, by which he sought to halt an arbitration hearing with the shareholders of the bank.

On Friday, 12 June 2020, the court dismissed the Receiver’s application to injunct the parties from obeying the court’s order, saying the parties should go for arbitration, which the Receiver himself had earlier opted for.

The Receiver appointed to liquidate uniBank filed the injunction in June last year.

The lawyers for Nii Amanor Dodoo of accounting firm KPMG, prayed the court to also make a determination on the previous ruling which directed the case for arbitration.

Mr Dodoo referred the matter to court after the owners of uniBank sought to challenge the bank’s liquidation by Bank of Ghana.