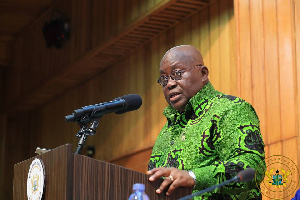 Aggrieved Menzgold customers have threatened that President Akufo-Addo will suffer an ill fate in the 2020 polls if he fails to get them their monies.

Speaking to Ghanaweb at the Madina Magistrate court, irate fund owners expressed displeasure about the president’s outlook towards the entire issue, threatening to ‘boot’ him out from his seat.

“You see this ‘kokromoti’ power (referring to thumb used for voting), it is the same one that voted you in power and it is the same ‘krokromoti’ we will use to vote you out”, an outraged customer who spoke to GhanaWeb said.

Accusing the president of prolonged silence, the coalition said the Chief Executive of Menzgold, Nana Appiah Mensah, also known as NAM1, is pushing the sitting president into opposition, with his failure to pay the customers after the shutdown of the investment company.

Meanwhile during the court hearing, NAM1 decided to drop all charges against some 92 Menzgold customers who were arrested for invading his residence at Trassaco Estates at East Legon.

The customers were charged with unlawful entry and offensive conduct after they forcibly entered the Trasacco Estates at East Legon in an attempt to confront Nana Appiah Mensah over their locked- up investments.

The case has been adjourned to March 3 after the judge hearing the case asked for an official document requesting an out of court settlement by complainant, NAM1 and all parties including the prosecutor agreeing to the request by NAM1.

Major markets in the Kumasi Metropolis will be closed down today, Tuesday, July 21, 2020 as …