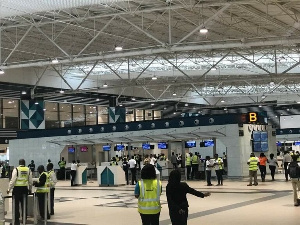 KIA is not up for sale for according to GACL

The management of the Ghana Airports Company Limited (GACL) says it is shocked by the decision of the workers to protest over an alleged sale of the company.

Workers of GACL on Wednesday, embarked on a demonstration against plans by the government to privatize the company.

But in a statement copied to www.ghanaweb.com, the GACL moved to clear doubts and misinformation about a proposal it has received from the TAV -SUMMA consortium.

According to GACL, there is no such plan to sell the company to the Turkish firm as being alleged by the workers.

It maintained that the proposal which is yet to be considered is a partnership proposal, and not one putting the outfit up for sale.

Contrary to assertions by the staff that they have been kept in the dark about the plans, the GACL noted that it has engaged them and explained in detail, the content of the proposal.

Below is the statement from GACL

At the meeting, the Managing Director of GACL, Mr Yaw Kwakwa, confirmed receipt of a proposal for Partnership from TAV-SUMMA which was yet to be considered. He assured the Divisional Union that they would be consulted when the process begins.

The Chairperson of GACL, Madam Oboshie Sai Cofie in an interview with Daily Graphic on July 3, 2020, said the Board had received the proposal but that no discussion had started.

The Minister of Aviation, Hon. Joseph Kofi Adda, also in a statement denied the allegation and assured the general public that his outfit and its stakeholders were considering a proposed Strategic Partnership arrangement to improve service delivery and expansion of infrastructure at KIA to achieve government’s vision of making Ghana the Aviation Hub within the West African Sub-Region.

Today’s agitation therefore, came as a surprise to Management of GACL. Management has always maintained a cordial working relationship with its stakeholders including the Divisional Union and wishes to assure the general public that the situation has been brought under control.

Major markets in the Kumasi Metropolis will be closed down today, Tuesday, July 21, 2020 as …