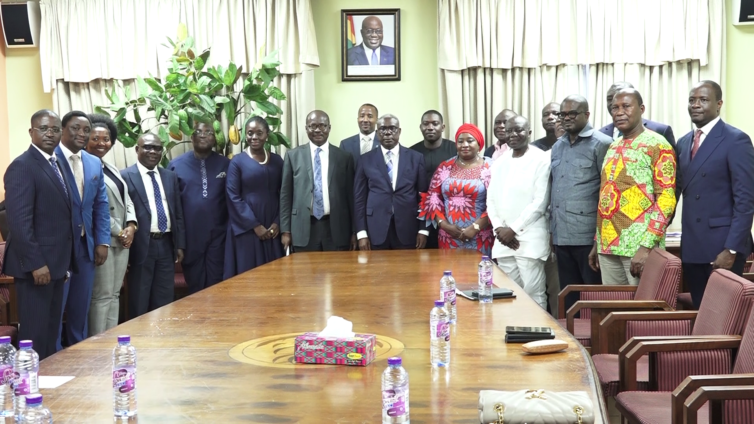 The Ghana Cocoa Board (COCOBOD) has signed a $1.13 billion syndicated loan to finance the purchase of cocoa beans for the 2022/2023 crop season.

The loan, which was secured with over 20 financial institutions attracted an interest rate of 1.75% plus Secured Overnight Finance Rate (SOFA).

Speaking after the signing agreement, the Board Chairman of COCOBOD, Peter Mac Manu, disclosed that COCOBOD is hoping to hit 850,000 metric tonnes after missing this year’s target.

“COCOBOD has been doing very well for this country, and I must say we will continue to do better. This season, we are hoping to hit 850,000 metric tonnes”, he said.

Mr. Manu stated that COCOBOD has put in place measures to support farmers increase yield, while protecting the environment.

“We have replaced old cocoa trees with improved seeds. We have also undertaken pruning exercises and supplied inputs to farmers. We are hopeful we can achieve the target and improve the livelihood of our farmers”, he said.

Mr. Manu, however bemoaned the negative impact of illegal mining, popularly called “galamsey” on cocoa production in the country.

He warned that the act could adversely affect cocoa production output if measures are not put in place to stop illegal mining which leads to destruction of forest reserves and pollution of water bodies.

Meanwhile, the Governor of the Bank of Ghana, Dr. Ernest Addison was hopeful the funds will help strengthen the local currency.

Funds to help stabilise the cedi

The Bank of Ghana is expected to “draw down” the funds from the Ghana International Bank in London, one of the participating banks of the programme.

The Central Bank will take the dollars and give the cedi equivalent to COCOBOD for cocoa purchases for the season.

The inflows will help boost BoG’s reserves – a move that could help in slowing the sharp depreciation of the cedi.

The local currency is said to have depreciated against the dollar by more than 30% since the beginning of 2022.

The rest are Industrial and Commercial Bank of China and one of Japan’s largest bank, MUFG.

The firms are expected to underwrite and lead other banks in securing the funds.

COCOBOD and the Syndicated Loan pogramme

Since the 1992/93 crop season, COCOBOD has consistently and successfully, through the pre-export syndicated finance facility, obtained receivables-backed syndicated loan each year from the international money market to finance its cocoa purchases.

The facility, which is the largest soft commodity deal in sub-Saharan Africa, has help the COCOBOD to finance cocoa purchases and related operational activities in the crop season.