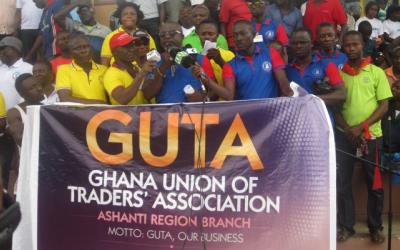 Government has been urged to make a definite pronouncement that will quell the rising tension between Ghanaian Traders and their foreign counterparts, particularly those from neighbouring Nigeria in the retail trade arena.

The Ghana Union of Traders Association (GUTA) in the Ashanti region, are Threatened to stage a Massive Demonstration against gov’t over foreigners infitreting local business in the country.

“He has described the recent closure of Nigeria’s trade borders to Benin and other neighbouring countries as Ghana as an outright breach of ECOWAS treaties.

According to the Public Relation Officer of the Association, Mr Albert Mensah Offei said, failure on the part of the Foreign Affairs Ministry as well as the ECOWAS parliament to put the member state in check is enough evidence of all treaties and protocols under ECOWAS being ineffective.

“Nigeria has blatantly flouted ECOWAS protocol if there is even something like that. Surprisingly, the foreign affairs ministry has failed to deal with this issue, nobody is talking to this issue and for two months Ghanaian goods have been locked up in Nigeria.

This act by the Nigerian government nullifies the entire ECOWAS Treaty on the free movement of people and goods,” he said.

“We will staged a massive demonstration against government, if he refused to address our Challenges.

The *P.R.O.* cite a letter by Nigerian traders to their President which sought to suggest that Ghanaians are maltreating them and denying them access to legitimate businesses.

*”He added that,* the Nigerians alleged that the situation has led to the loss of lives in some instances, allegations the Ghanaian traders describe as blatant lies.